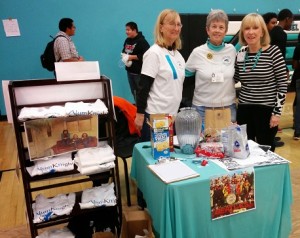 On January 16th, 2015 the Sophomore Class sponsored a DNHS 50th Anniversary Winter Carnival, in lieu of a Winter Ball. The AlumKnights “Celebrate the 60’s” booth was a big hit, probably because everyone won something.

Guests purchased tickets as they entered the Carnval for 25¢ a piece. They then “spent” tickets at various booths. The Sophomore Class would keep 10¢ per ticket and each booth received the remaining 15¢ per ticket.

The 1st Winter Carnival was a great success. The Choir’s Kareoke machine was a hit as was “whipped cream” on the football team, Nikki Turman’s art class did face painting of children, Amy Traylor’s digital art class, ROTC, Black student Union, and many more. The AlumKnights booth featured 10 —  $10 gift cards donated by Sonic Drive-In. Jillian from Starbucks donated a pound of coffee and mug and $5 gift card. We also had Lota Burger cards and pizza cards still remaining from last summer. About 20  T-shirts were prizes as well as the decals and pens. .However 50 of the prizes were the packages of Ritz crackers along with candy. The AlumKnights booth probably netted about $50-$60 but the interaction with students, parents and teachers was much more valuable.