The original Del Norte HS Knight, a gift from Del Norte High School’s first graduating class of 1966  returned home on March 21, 2014 after 18 months of renovation, rest, and relaxation. The 10 ‘ tall Knight was adjacent to the demolition fence of the original Del Norte HS in the fall of 2012. The Knight had fallen into disrepair and was no longer its original black color. Its metal parts were rusty and scratched with profanity. 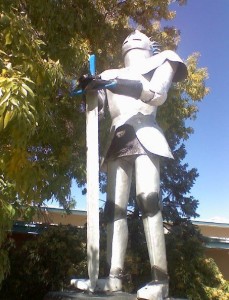 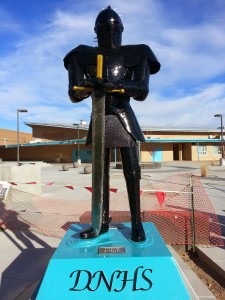 1966 Class members decided to refurbish the Knight with direction by class of ’66 Ron Kaehr of Kaehr Coatings. The Knight is now a beautiful gleaming black with a turquoise plume on the helmet. The clear coat will help prevent vandalism from graffiti.

In the meantime demolition of the old original DNHS took place in fall winter of 2012 / 2013. Further construction created the school’s east entrance with patio and parking that just opened. The Knight comes “home” on March 21 with assistance by APS contractor Westwind Landscaping.