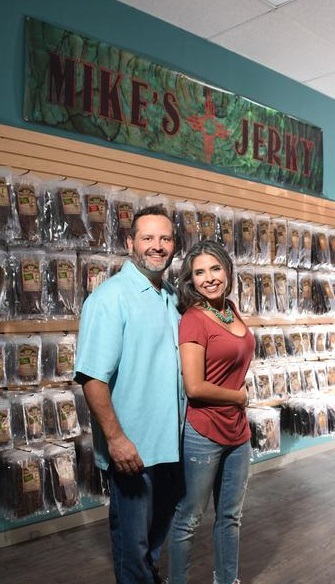 Michael & Brenda Pacheco Grier, both from the DNHS Class of 1990, took a chance and turned Mike’s hobby of making beef jerky into a successful business. During the economic downturn of 2008, they left the family business and opened Mike’s Jerky which specializes in traditional Southwest thin and crisp beef jerky. They recently expanded into a third location and plan to expand outside of Albuquerque. Read ABQ jerky business expands, aims at wholesale in the Albuquerque Journal.

The business received national publicity in 2012 with a bizarre burglary. A wig-wearing man dubbed the “Beef Jerky Bandit” smashed his way into Mike’s Jerky in Albuquerque and made off with the goods, mostly the bacon flavored variety of Mike’s Jerky. At least the bandit reached for “junk food that’s good for you“ according to Men’s Health. Jerky, the magazine wrote, “is high in protein and doesn’t raise your level of insulin — a hormone that signals your body to store fat.” Read Beef Jerky Bandit Strikes Mike’s Jerky in Albuquerque (VIDEO) in the Huffington Post.

The business also received national attention in 2016 when it was included in the Travel Channel’s “Bizarre Foods with Andrew Zimmern.” The episode pointed out the unusual nature of New Mexico jerky — usually thin and dry rather than thick and chewy with “lots of sugar” — and mentioned Grier’s most popular product: green chile jerky.