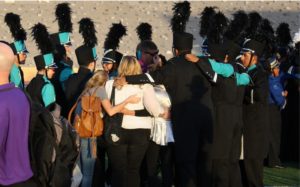 For the fourth year, the AlumKnights supplied volunteers in support of the DNHS band’s participation in the New Mexico Pageant of Bands (POB) marching band competition on Saturday, October 22, 2016 at Wilson Stadium.

The Del Norte Band is one of the ten APS POB Member Bands that produce this all-volunteer event that attracted 27 bands and 1,800 band members from across the state. A portion of the proceeds are disbursed to the POB Member Bands based on volunteer participation. Last year, the DNHS band received about $500 in this disbursement.

This year, the Phantom Knight Marching Band won 3rd place for Class A Bands at the Pageant of the Bands competition. Del Norte was also awarded the 2016 POB Spirit of Band Award which is presented to the band whose students and parents best exemplify School Pride, Friendship, Creativity, Camaraderie and Good Sportsmanship. Way to go Knights!