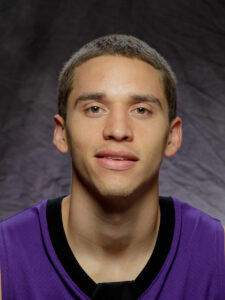 Scott Bamforth, a Del Norte High School alumni, is on the roster of a TBT team composed mostly of former Lobo men’s basketball greats. The team will compete in the 2021 TBT (The Basketball Tournament), a winner-take-all $1-2 million basketball tournament held each summer. Read more about the TBT team in the Albuquerque Journal article “Past Lobo hoops greats form alumni team to compete in TBT.”

Scott played basketball for Del Norte High School and was named first-team all-state twice, as well as the New Mexico High School Player of the Year in 2007. He left Del Norte as the school’s all-time leading scorer. At Western Nebraska Community College, he averaged 18 points per game his first season (2008–09) and was named to the 2009-10 NJCAA Preseason All-America Third Team. He transferred to Weber State where he played in 99 games overall, with career averages of 13.6 points, 3.2 rebounds and 2.5 assists per game. He finished 11th in scoring in school history. He earned All-Conference honors each season, and set a school record with 259 career made 3-pointers, as well as the single-season record of 103. In March 2013, he was named to the Weber State Men’s Basketball 50th Anniversary Team, as one of the school’s best 50 players in its history. Scott has played professionally with several European teams and currently plays for Le Mans Sarthe Basket.

Scott has endured several hardships on his journey in basketball. He found his father, John, in their Albuquerque home after a heart attack had taken his life in May 2002. Scott was just 12. For months, he initially was left to care for his seriously ill mother, Elizabeth, often missing class to help feed and tend to her daily needs until she went to live with his grandmother three hours away. She died of liver damage in December 2004. Read more about these and other challenges in the 2013 Associated Press article “Weber State’s Scott Bamforth overcomes tough times to break Damian Lillard’s 3-point mark.”