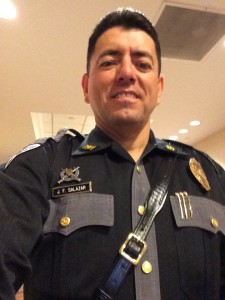 Jon Salazar, class of 1985, was honored with a promotion to the rank of Captain by New Mexico State Police Chief Pete Kassetas. Jon graduated with a bachelors degree in Criminal Justice from NMSU.

Jon has served in a variety of roles during his distinguished career with the State Police. He currently serves as a liaison to the New Mexico Department of Homeland Security Emergency Management Department. As such, he is the New Mexico State Police HAZMAT Coordinator, the State Coordinator for organizing state, local and tribal law enforcement agencies in receiving equipment from Federal Military Organizations, serves during massive events in emergency operations at the Emergency Operations Center (EOC), and he works with the New Mexico Department of Health  in organizing the Strategic National Stockpile Program for large supplies of pharmaceuticals and other medical supplies in event of a terrorist attack or a large scale human or natural disaster.