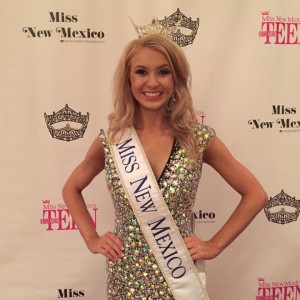 Marissa Livingston, a 2009 DNHS Graduate, was crowned Miss New Mexico 2015 on June 20. Marissa was a member of the Castelles, student government and President of the National Honor Society. She has a B.A. In Mass Communications and Journalism from UNM and is currently in public relations having served as Communications and Marketing Intern for UNM Athletics and as a Media Affairs Intern for the White House Office of Communications.

Marissa will have a few months to prepare for Miss America 2016 in Atlantic City on September 13, 2015. She said she began her work for the Miss New Mexico crown more than two years ago and was happy that her hard work had finally paid off. She is thankful for the support she received from her family and friends during her journey:

“Yesterday my life was forever changed as I was crowned Miss New Mexico 2015 within the Miss America Organization. This has been a dream of mine for years and I’m so incredibly honored to represent the state of New Mexico for a year and compete in Atlantic City for the title of Miss America in September! I wanted to say thank you SO much to everyone for the love and support. I’ve been overwhelmed with the hundreds of texts and messages I have received and feel so incredibly blessed to have that support system. I can’t wait to see what this year brings and how I can make an impact in our great state. I cannot wait to put my efforts to supporting Children’s Miracle Network Hospitals and @lobo_thon! My heart is full of love and I cannot wait to share it with the kids at the UNM Children’s Hospital. It’s never too late to follow your dreams ❤ Thank you again to everyone!!!!”

There is a nice update to to Marissa’s preparation for the Miss America Pageant in the September 6, 2015 Albuquerque Journal article Albuquerquean ‘so proud to represent New Mexico’.

Tune in to watch the Miss America Pageant live on Sunday, Sept. 13, on ABC.