Skip to content
HOME > Knights in the News > Mike Foote, Founder of the Albuquerque Baseball Academy 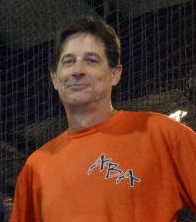 Mike was a baseball Letterman for UNM from 1976 to 1980 and was subsequently drafted by the Cincinnati Reds in June of 1980. After three seasons with the Reds, he moved on to the Kansas City Royals. While playing in the pros, Foote noted that there were players from New Mexico who were never drafted, but were better players than many of the professionals around him. It was at this time that Foote began to wonder why more NM players did not get the opportunities that he had.

Read his remarkable story in the Albuquerque Journal article An academy for ballplayers by Kevin Hendricks.