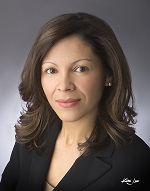 New Mexico Governor-elect Michelle Lujan Grisham has appointed Del Norte High School graduate Olivia Padilla-Jackson to the Cabinet as Secretary of Finance and Administration, the Governor’s top budget official. The Secretary is responsible for the operations of the Department of Finance and Administration’s five divisions, and also serves on many Boards and Commissions.
Read “Gov.-elect Lujan Grisham makes three Cabinet picks” in the Albuquerque Journal.

Olivia Padilla-Jackson is currently the Budget Director for the City of Albuquerque. Her previous experience includes work as a trader/analyst at the Federal Reserve Bank of New York, director of the New Mexico State Board of Finance, and Director of Finance for the City of Rio Rancho. She also worked for the New Mexico Legislative Finance Committee conducting economic, policy, and budget analysis. Ms. Padilla-Jackson chairs the Manzano Day School Board of Trustees, serves as Vice Chair on the Council for the Hispano Philanthropic Society and is a board member for the Sandia Foundation. Previously, she served as a board member for the University of New Mexico Alumni Association and the New Mexico Retiree Health Care Authority. She graduated from Del Norte High School in 1993 and received a bachelor’s degree in Business Administration from the University of New Mexico, a master’s degree in Public Policy from the University of Michigan, and she completed an executive leadership program for State and Local Government Senior Executives at Harvard University’s John F. Kennedy School of Government.