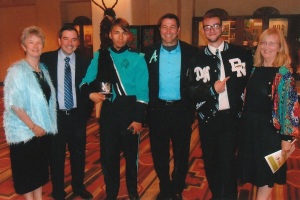 On Friday, October 3, 2014 the APS Foundation held their annual “A is for Art” fundraiser that included dinner, auction of student created art and student performances. A new feature of the annual fundraiser is having a school be “adopted” as part of the live auction. This year the Del Norte Fine and Performing Arts program was the benefactor of the auction. The AlumKnights began the bidding with an opening bid of $1000, but were eventually outbid by two companies, Ray Lee Homes and Westwind Landscaping each contributing $2,500 so the Fine Arts program received $5,000!

The APS Foundation $5,000 “A is for Art” proceeds will be distributed to various DNHS programs including band, choir, orchestra, theatre, art, digital art and photography. It will not be an even split among the programs but rather several factors will determine the amounts each Fine Arts program gets.