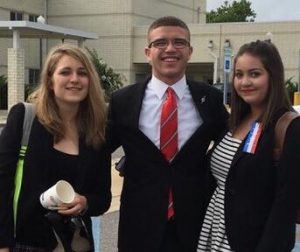 Tim Mondloch, a 2017 DNHS graduate, attended the 2017 National Speech and Debate Tournament on June 18-23, 2017 in Birmingham, Alabama, after being selected to represent the state in the World Schools Debate Competition.

His team of three, one of two teams sent from New Mexico, competed in 6 rounds of debate over 4 days against teams from across the nation. They did not break to the top 32 teams (178 teams –954 students competed), but they did an outstanding job representing their schools and their state. Tim’s teammates were Riley Guttromson from La Cueva H.S. and Katelyn Key from East Mountain H.S.

From Timothy: “I would like to thank you all for supporting my teammates, Riley and Katelyn, and I as we represented Del Norte, La Cueva , East Mountain and most importantly the state of New Mexico. I was in awe of the National Tournament and it is an honor to have been able to experience this incredible event. I met new people from all around the world: It was the largest World Schools Debate tournament to date. Teams from Morocco, Taiwan and Tanzania were all in attendance along with teams from all across the country! It was an experience that I will never forget and words cannot express the gratitude that I have for all of you who helped me make it to this moment. I have also gained knowledge that I can share with my fellow teammates from Del Norte so that they may pick up the torch and carry on. Thank you for giving me the opportunity of a lifetime!”